Chances are if you weren’t around the Bull Terrier show rings in the UK around the late 1980’s to mid 1990’s, you won’t have seen me or know who I am. I’m not the most recognisable person in the breed by any stretch of the imagination – I’ve rarely set foot in a show ring since I was a young man (or younger man I should say!), I’ve bred very few litters in my time, never stood in front of one single line-up as a judge, in fact I haven’t even owned that many dogs over the years. 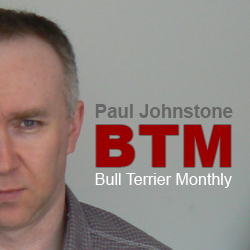 Although my Grandfather bred Bull Terriers as far back as the 1940’s, – including a red dog called Boxer that my dad owned when he was a young boy – I didn’t get my first Bull Terrier until 1985, a lovely little bitch called Bonnie who was the sweetest, most kind natured girl you could wish for. Oddly enough she was sired by the most intimidating looking Bull Terrier imaginable, a dog named Public Eye – a son of Ch. Catrana Eye Opener Of Aricon no less!

The guy who was responsible for producing Bonnie was Andy Croft of the Tandorc kennel, still a very good friend of mine to this day, and perhaps best known for breeding and owning a dog called Nevada Allen Of Tandorc – a CC winner under Audrey Edmond (Ghabar) in the 1990’s, who later went to Belgium and is behind many great European dogs.

Bonnie unfortunately never produced a litter after unsuccessful matings with both Ch. Bulivar Battlestar and a lovely Aricon/Brobar bred dog named Andromeda Star – but she was a very much loved member of the family until she died in 1997 at the age of 12.

In the meantime two others came to stay, firstly a bitch called Tara who turned up outside my house one day looking like she’d been in the wars. It turns out she had, after a bit of inspection I found that she had been used for dog fighting by her owner – so let’s just say I decided they weren’t going to get her back! Tara was quite a handful and I couldn’t risk her being left alone with Bonnie, but after a time she turned into the very gentle girl that she probably was before those scumbags got hold of her, and thankfully she ended up being great pals with Bonnie.

Sadly, we only had Tara for a year as she died of cancer – she must only have been around 4 years of age. Nevertheless I’d like to think we did give her some love and happiness in her short life…

Not long after, Andy gave me a fabulous bitch puppy who he planned on showing a year or two down the line as he felt she was destined for big things in the breed. I gave her the name of Sue, but most people remember her better by her show name – Tandorc Hazy Fantazy.

Sue did indeed turn out to be as good as what we thought, and both her and Nevada Allen Of Tandorc were shown extensively by Andy in the early to mid 90’s. Neither dog got anything like the rewards that their quality merited, goodness knows why because they were two outstanding Bull Terriers, dozens of Class Wins between them over the biggest and best of the era, yet only one CC between them – it’s puzzled me ever since that has? Not mentioning any names, but one person described Sue as being ‘possibly the best Bull Terrier that was ever sired by Ch. Ghabar Flagship’. Considering who else came from Flagship, that is some praise…

Sue also failed to produce from one of the dogs myself and Andy chose for her, that one being Ceilteach Lonely And Strong – she did however have two litters to others, firstly Nevada Allen Of Tandorc and then after the failed matings she had four puppies to Suejabul Torro Blanc. Unfortunately two of those puppies died, and as weeks went by it became apparent that the surviving dog was having problems with his front left leg. As such I knew I couldn’t sell him and in any case I’d grown very attached to him and didn’t really want to part with him anyway … I called him Eddie.

To say Eddie had a problem with his leg was an understatement, an x-ray taken once he was a bit bigger and older revealed a horrific fracture, probably the cause of his mother sitting on him – the vet said she’d never seen anything like it and advised me to take Eddie up to a place in Northumberland to a man called Malcolm Ness, apparently one of the top bone specialists in the country. Mr Ness told me that while there was nothing he or anyone else would be able to do to completely correct Eddie’s bone structure, he could stop it getting any worse and would give him the chance of leading a reasonably normal life. That was all I wanted to hear, it was music to my ears!

An operation, a few steel pins, plates and stitches later and Eddie was back, he healed really well and although extremely disfigured it didn’t hamper him at all. He could run and jump with the best of them and would easily contend with Sue when they got into typical Bull Terrier rough and tumble. Eddie in fact started most of it, he was a complete clown – Mr Ness said he’d never grow up mentally as a result of him being put under anaesthetic at such a young age – and he was right, he never grew up, he was a puppy all his life.

Eddie came into the world just a few weeks after Bonnie left it, and he and his mother Sue lived in perfect harmony until the end of their days in 2005. Sadly that was within a short time of each other, a few months – Eddie like many others before and after fell to the dreaded kidney failure at eight years of age, Sue lasted a bit later until thirteen years of old age finally caught up with her.

So there you have it, as I said at the start I’ve not had loads of Bull Terriers, you can count on one hand the amount of litters I’ve bred, I’ve not owned or bred any Champions or major prize winners and I’m useless at showing them. I’m just a guy who loves the breed …

Oh, I nearly forgot, I spent 10 years from 2002 putting together a magazine called Bull Terrier Monthly as well!