I’ll sign off for Christmas by revealing the identity of the last ‘Mystery Bull Terrier’ that I featured a few weeks ago, and incredibly it doesn’t look like anyone has managed to name her which I’m very surprised about.

You may remember she was a brindle bitch from way back and the clue I gave to her identity was that ‘she holds a record that will never be equalled’. By that I meant she was the first in the breed to achieve one particular feat, and while others can manage the same achievement there can only ever be one who does it first… 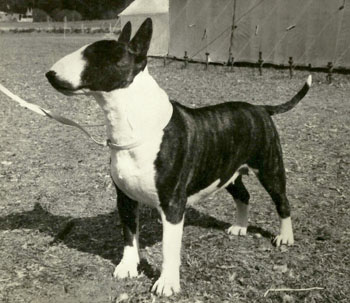 The bitch in question is widely regarded as being Quita Youatt’s finest – and that in itself is quite an honour – but she also managed to become the first coloured bitch to be judged Best In Show at an all breed Championship Show at the Bournemouth Championship Show back in 1976. She is of course the one and only Ch. Kearby’s Temptress.

That will do for this year, I’m going to have a bit of a break but it will be business as usual sometime in January – I’d just like to wish everyone a very happy Christmas and best of health and fortune for 2015 … mind how you go.