I thought it would be a good time to throw in one of those mystery Bull Terriers again, to give people something to take their minds off Christmas shopping!

So here we go, as you can see he’s another white dog from a bygone era – and as with the previous mystery guest star (Ch. Foyri Verify) he was a rather successful boy in his day. With a bit of thought there are quite a few good clues I could give to help identify him, but I fear most of the clues might make naming him a bit too easy – I might give the game away?

‘This isn’t the most well known photograph he appeared in’. 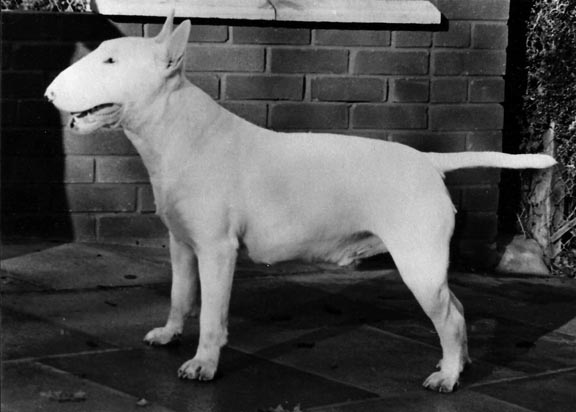 Some people are not going to know what on earth I’m on about in saying that, whilst at the same time I think it might register with others straight away.

* It’s just for fun and if you want to leave a comment below naming him please do so, but full marks to anyone who can correctly identify him.

I’ll reveal his name at a later date.

* Due to the amount of ‘spam’ comments received I’ve disabled them showing automatically and now moderate the comments as they come in. Those that are not spam are usually approved by the end of the day. Alternatively you can leave your answer on the relevant post on the BTM Facebook Page.