I read something quite interesting a while back relating to the rock band Radiohead. Apparently they came up with a very novel way of launching one of their recent albums, instead of setting a fixed price for fans to buy the album they instead just let them download the album and allowed them to pay whatever they wanted to pay, or whatever they felt it was worth. This could have ranged from just a few pennies up to several pounds, or indeed something around what they would have expected to pay anyway.

Word has it that fans crashed the site due to the sheer volume of visitors, with literally hundreds of thousands of copies being downloaded in a matter of days. However such was the buzz created by this marketing plan that the band are said to have made more money from the release of the album than they had from their previous standard album release.

That got me thinking – would I be brave enough to try something similar in 2014 with my BTM Complete History CD? Answer … you have got to be joking ha-ha! 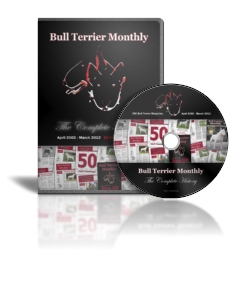 Seriously though, while I’d be terrified to go to that extreme, I started to think that it might be an idea to see what the breed enthusiasts felt was a fair price for it as opposed to what I’ve decided it should be sold for (£67 if you didn’t already know) – in other words go against convention and let the buyers decide the price instead of the seller and creator.

So basically I’m after some feedback – from those who have already bought the BTM Complete History CD and those who haven’t – those who subscribed to the magazine while it was running and those who didn’t – anyone really as long as they’re into Bull Terriers and wouldn’t mind sharing their opinions of my product with me.

I think you get the idea, just fire your opinions at me and give me something to mull over – tell me what you think, and please don’t worry about hurting my feelings. Believe me I had some of the nastiest and most spiteful comments imaginable aimed at me while the magazine was running, I doubt anyone could come up with anything worse than I’ve already heard … not that I want anyone to try of course!!

Please be realistic though and keep in mind the amount of work that went into it and the amount of content on it – there is over 2000 pages worth of Bull Terrier information, photographs, articles, pedigrees, advertisements, critiques and so on, and it took 10 years to put together. I’d like to think people would respect that when making a comment.

If after reading this you feel you’d like to have your say, please click here to go to the ‘Contact’ page – put BTM Feedback in the Subject Line and fire away. I’ve no idea what I’m going to get back, but if I find a common viewpoint and that most people come up with roughly the same price range for the CD (particularly if it is much different to the one I’ve already got it at), then I’d have to take the feedback on board and consider giving the people of the breed what they ask for. In a nutshell, if you want me to offer it at a different price then just tell me what you think that price should be…

Many, many thanks in advance to anyone who takes the time to contribute and please don’t hesitate to use the ‘Social Media’ buttons below to notify others in the breed.

Oh and one last thing, I’d like to wish all the people in the Bull Terrier breed and their immediate families (both of two legs and four) a very Merry Christmas and best of fortune in 2014 – good health and happiness to all!